After a decade in the making, Alan Moore’s highly anticipated novel “Jerusalem” has been released. It is an experimental pastiche, or imitation of different literary styles, really less of a novel and more of a collection of short stories threaded together by their setting: Moore’s hometown neighborhood of The Boroughs, Northampton, at disparate moments throughout time. The stories are of mostly-real characters drawn from the history of the Boroughs and from Moore’s own family, woven into a hallucinatory tale of commoners, prostitutes, ghosts, and angels; all while calling upon thematic influences of figures such as William Blake and Albert Einstein. 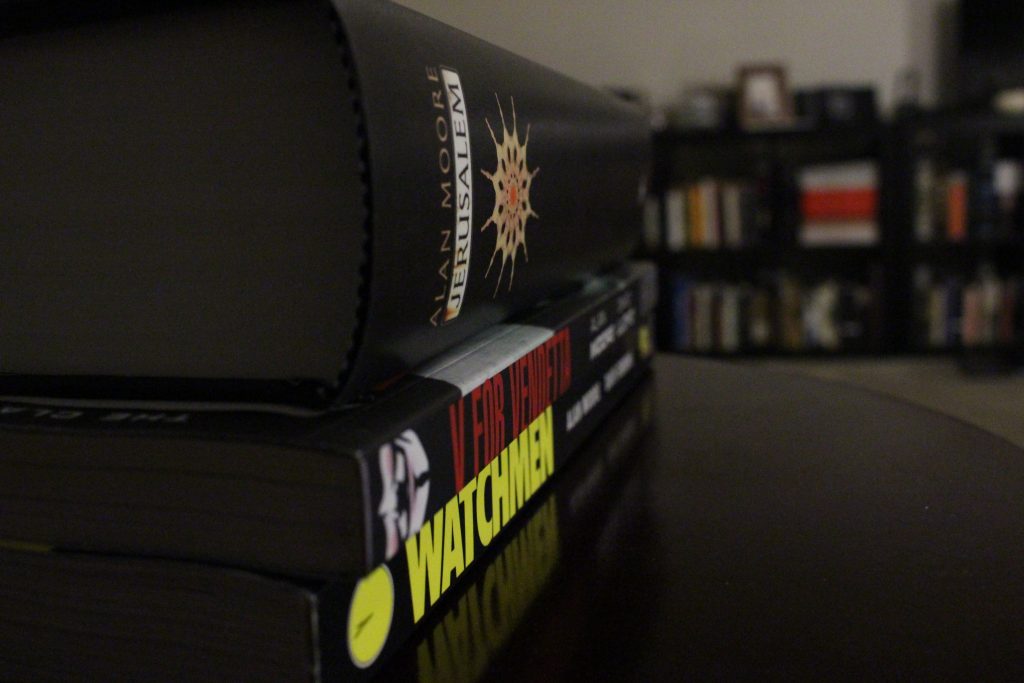 “Jerusalem” is Moore’s second novel, essentially a spiritual successor to his 1996 book “Voice of the Fire,” but he’s best known for writing graphic novels like “Watchmen” and “V for Vendetta,” stories which both received the Hollywood treatment. Yet, despite their popular success, you won’t actually find Moore’s name anywhere in those films. He turned down significant payment for being listed in the credits and has never seen the movie adaptations of his work. Though he created those stories, DC Comics owns the rights to them. He’s called Hollywood films “regurgitated worms” which “water down our collective cultural imagination,” and his disagreement with DC’s treatment of the intellectual properties convinced him to withdraw from the mainstream comics industry and distance himself from the work he had done for them.

Moore’s insistence on creator control shows in the 1,200 page “Jerusalem.” The book is as long as the Bible and could’ve used editorial slashing, but Moore insisted on leaving it as intact as possible. The prose is lyrical, at times frustratingly overwrought and even maddening, but it is so full of gems— mind-bending metaphors, logophilic turns of phrase, and disarmingly affecting stories— that you end up clamoring to find out what Moore’s up to. It’s like he wants his readers to go mad with him. But none of this is odd, coming from a man whose midlife crisis involved declaring himself to be a wizard.

To better understand the reasoning behind “Jerusalem”’s lofty aspirations, we have to trace Moore’s growing interest in occult themes throughout his earlier writing. In the 1980s he revamped “Swamp Thing” for DC, reimagining the mossy monster as a hero with the ability to immaterialize into a universal ‘plant mind,’ exploring themes of mystical and psychedelic states of consciousness. When he later released the graphic novel “From Hell,” a meditation on the historical and psychological repercussions of Jack the Ripper, Moore claimed that during the course of writing he’d “accidentally made a true statement” that had since obsessed him: “The one place the gods inarguably exist is within the human mind.”

Shortly thereafter, he announced his dedication to being a ceremonial magician. He wrote “Promethea,” a comic about a girl who is the reincarnation of an ancient goddess of imagination. Thematically it is a dissertation on Qaballah, a mysticism concerned with the magic power of letters. It also presented Moore’s concept of the Immateria (a universal ‘idea space’), expounding on questions of the curious nature of ideas (like where they exist and who they belong to), and reflecting a concern with the very possibility of intellectual property.

But primarily, “Promethea” explored the power ideas have to affect reality. For Moore, art is magic: it is the “science of manipulating symbols, words, or images to achieve changes in consciousness.” To cast a spell is simply that— to spell out a word.

Moore’s contributions to our culture’s collective ‘Immateria’ have already reverberated through this noosphere and sent fissures into reality. “Watchmen” was a groundbreaking comic in its own right, presenting a realistic take on the superhero genre that colored the darker tone of comics for decades to come. “V for Vendetta,” popularized through the film, inspired the Anonymous Hacker’s Collective and the Occupy Movement to don Guy Fawkes masks as a symbol of insurrection. Moore’s words have affected the world at large in a significant sense.

Moore is keenly aware of the subtle but subversive social impacts of his work, and addresses this with a wink in “Jerusalem” with the character of Alma Warren. Alma serves as the author’s alter ego, depicted as a manic artist planning to change the world with a series of visionary paintings. “Jerusalem” examines the power of art, as well as the connections between the artistic creative process and altered states of consciousness like madness.

“Jerusalem” itself imposes a sort of fugue state upon its reader through its polyvocal style.  Moore’s writing shines most in the chapters concerning Alma, with the somber narration recognizable from “Swamp Thing” that established his literary cred, but he inhabits the minds of myriad other characters throughout the book. At times he succeeds beautifully, at others his voice seems forced. This is partly because he maintains the third person with a writing style heavy on monologue, creating tension between an omniscient narrator and the subjective views of individual characters. It shows most glaringly when the respective people of the Boroughs all seem to have the same encyclopedic knowledge of the area’s history as Moore does. The narration clues readers in to the feeling that this knowledge bubbles up from an unconscious level in the form of strange memories, premonitions, or half-forgotten dreams.

So, when it starts to become clear that the consciousness Moore seeks to inhabit is not really that of any one person, but the consciousness of the Boroughs itself, the audacity of his project seems inevitable and brilliant. For Moore, the altered state of consciousness brought on by writing and inhabiting the ‘mind’ of his neighborhood is itself an act of magic, a mad wizard experience he wishes to pass on to his readers in an unabridged form.

“Jerusalem” is a walking tour through the geographic psyche of the Boroughs. Moore channels the ghosts of his neighborhood and their stratified narratives buried within the bricks, superimposing time, space, and subjectivity into a single, synchronous eternity. The massive tome itself is an apt metaphor for the story’s main theme of eternalism, or the idea that all events that have happened, will happen, or could happen all exist simultaneously—already written, layered upon themselves like pages of a book.

Dedicated readers who delve into this dense grimoire will be rewarded with kaleidoscopic insights and fantastic stories, and once they are adjusted to the novel’s dream-like style, will be happy to submit to the enchantment of Alan Moore’s latest spell.

Tags from the story
Book Review
0