“I can’t believe it’s like this,” I thought to myself.

The thing that I noticed with every film portrayal I’ve ever seen in movies like  “American Pie” or anything that was fashionable in the 2000s. The amount of partying in college. I was around nine years old when I asked myself why college was so important if it was just partying all day. It turns out I was right, that it was mostly partying—but only for those who can afford it.

As is the case most of the time in this country, the rich are yet again damaging people’s view of the education system. The college admissions scandal—“Operation Varsity Blues” if you have a flair for the dramatic—was a conspiracy to influence who was admitted into the University system by bribing college officials to let wealthy children in and inflating said wealthy children’s test scores and grades. People like the Desperate Housewives star Felicity Huffman or Full Houses Lori Loughlin, whom are accused of bribing university officials from Stanford and the University of Southern California respectively. The recent scandal has a lot of people rethinking the validity of our education system and although there are only 11 accused universities, you can see the signs on every college campus, including Portland State’s.

School is absurdly expensive for someone like me. I work multiple jobs at once, including my own business ventures. It is imperative that I keep a strict schedule during the school year to keep up with both classes and my financial wellbeing. Unfortunately, the recent scandal doesn’t necessarily surprise me. Working at an apartment building, leasing to almost exclusively students has taught me a lot. Now I get how non resident students can afford PSU full-time.

It seems a little redundant. Someone described the process as, “Wealthy kids, going through school for the paper to be in their parents companies.” The media’s coverage of forged grades for entry into elite schools may seem distant, but parts of the scandal remind me of PSU, which has similar issues on a surface level. Students do not seem prepared for life in general. I see so many students who do not possess even rudimentary skills, like plunging a toilet for example. Even basic cleaning needs are a task. I feel as though there is some gap still between the student body. In my interview with a co-worker and his account of a bias system, I am at odds with the PSU community a bit and it’s lack of support-with news like this especially taken into account.

I can understand how someone can feel cheated, especially if you are like me and have a large amount of loans—especially considering how much attending school costs. Non-residents have to pay an average of $35,941 dollars a year—or for a residents, $29,797—which you can’t just have on you obviously. What makes it worse for me and others like me is seeing the cost of living comparisons as well. Living expenses in Chicago cost about half as much on average.

Most people should feel discouraged by the fact that the wealthy can just screw off and do whatever they want everyone else must work for their grades. It seems like yet another reminder of a broken system that is constantly failing its students.

At least that’s how Carter sees it. Carter is a maintenance man at one of the more prominent apartment complexes close to the PSU campus. He is an avid writer, reader, photographer, and consumer of the arts. He is a former student of Oklahoma City Community College and University of Oklahoma back in his home state, and, most recently, Portland State University. Carter is currently working and out of school, since the cost and stress became too much to handle. This recent scandal has furthered the seeds of his doubt in the validity of the university system in general.

Jeremy: So, you’ve attended 3 seperate schools? With PSU being the most recent?
Carter: Yes, I first attended Oklahoma City Community College and then University of Oklahoma afterward. When I went to community college, it was targeted toward low income people. On the upside, they were more understanding, but the problem was that everyone seemed to just be filling out paperwork. All the kids were there for the grade and the teachers would just be showing up for the paycheck. It would just be the minimum requirement.

JH: I feel the same way, but about PSU to a degree,at least in terms of writing classes.
CA: Right, and I love learning, but I think college has gotten to barely be a learning institution. It almost works better as a think tank.

JH: How was your experience at University of Oklahoma versus PSU?
CA: he bag there was all sports and frats. That was just the heart of social activity. So, if you were outside of that you’d be out of luck. I’m sure there were ways to join clubs, but I did my initial semester at community college and it isn’t like I’m some rich kid on campus, so I naturally felt like an outsider. It was built for people a lot wealthier than me. PSU has been nuts. I’ve learned coastal wealth and Oklahoma wealth are two different animals. I knew people who were wealthy from oil but that’s nothing compared to some of the people I’ve met at PSU. Other people just get their homework done for them. It’s literally four years of partying, then a job afterwards thanks to their parents. I don’t know, that’s not who I find myself wanting to interact with, so it creates a culture shock. 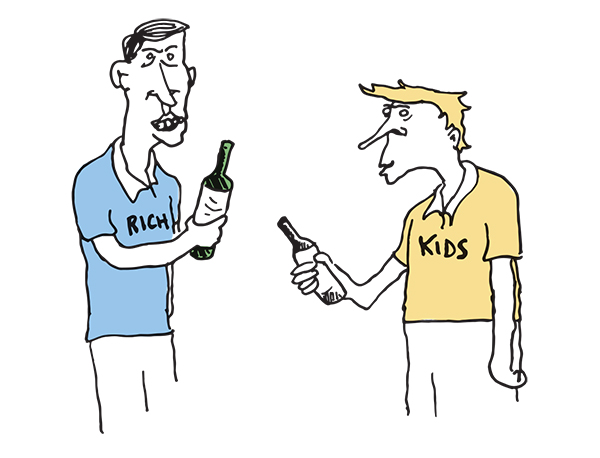 JH: It’s wild, I’ve worked for a long time. I’m not really rich coming from the midwest. These people feel like they’re on a whole other level. Bullshitting grades, the partying, etc.
CA: I mean with the admissions scandal we are literally seeing people buy their kids’ way through school. You see these videos of these kids who only care about their image.

JH: It only seems to be about social media presence like Coachella.
CA: Right, and that is a music festival but I still see people that don’t even go for the music anymore. They only really care about posting on social media about it.

JH: Honestly, I haven’t really cared about the lineup in quite some time. I generally only see memes about how they appropriate native culture and whatever else.
CA: It’s also almost as expansive interestingly enough, actors are even getting caught up in the [admissions] scandal.

JH: I read one of the actresses from Full House is being charged.
CA: It’s sad. Universities are supposedly these higher structures where education is supposed to be the priority. Power structures are in place for a reason. They just exist perpetually.

CA: I mean, if you were an admissions person would you care about letting one person in? Especially when you can get paid.
JH: I suppose not. We see these places with wealth gaps. I mean, I talk to you all the time about the differences in food prices from where I’m from.
CA: Exactly, and that is a symptom of a bigger issue in unaffordable places like Portland or any other major city on the west coast. It’s just hard to understand what we are paying for as people who do not get things handed to them. Experience is hard to come by these days I guess.

Experience is something that can’t be bought despite what some of some may think. The college admissions scandal saw rowing and soccer experience falsified and photoshopped while creating forgeries of test results to justify wealthy children’s admission. Experience is good, bad, and sometimes very ugly. Despite this, we ignore most of those with unique experiences for the wealthy and the boring again and again. If people want the world to be a more open place then they should start by supporting those who can’t just throw a check at all of their problems. The constant hypocrisy of calling PSU or any other university with such an obvious wealth gap an open and safe space isn’t necessarily true. It seems most people who find themselves here are cut from the same needlessly expensive cloth. Higher education has become an expensive macrotransaction instead of a worthwhile addition to the academic experience.