On September 22nd, thousands of students in the Portland area ditched class to meet downtown for the Global Climate Strike. Student activists organized the event to encourage Oregon’s lawmakers to sign onto a Green New Deal to transition the power grid from fossil fuels to renewable energy.

That grey Friday morning, students and supporters filled buses and sidewalks to meet at Terry Schrunk Plaza before marching over the Hawthorne Bridge. Those undeterred by a lawn of thick, treacherous mud heard a series of ecocentric speakers, many of whom were indigenous activists. This was not the first climate rally for many students. “I made this sign in March,” Megan, a 10th grader at Catlin Gabel said, referring to the walk-out rally that pressured the school board to make good on a promise for climate curriculum. One mission of Portland’s climate strike on Friday was to encourage local government to prohibit Zenith Energy from using the infrastructure to ship crude tar sands.

People took the slow march across the Hawthorne Bridge funneling into a single traffic lane to reach OMSI for speeches from student leaders and local officials, like City Commissioner Jo Ann Hardesty. Portland police and volunteering peace officers were taxed with keeping the crowd out of oncoming traffic and off of the bridge’s partitions. Several arrests have been reported: one adult for vandalism and two juveniles for criminal mischief and resisting arrest. Videos showing police officers shoving students aside to arrest two teenagers standing on the partition of the Hawthorne Bridge.

The arrests have drawn widespread condemnation from several leaders, including City Commissioner Hardesty and Nkenge Harmon Johnson Urban League’s president and CEO, for excessive use of force in an otherwise peaceful march. Some viewers allege racism since a widely viewed video appears to show the police targeting two black teens in a group of white protestors, while a video from Oregonian/OregonLive shows the police arrested one black student and one white student. In response to the video, Portland City Council candidate and Portland State University ASPSU faculty advisor, Candace Avalos tweeted: “What is happening here??? I mean seriously, I need answers. I’m having a hard time thinking of any scenario that would warrant this kind of response. These are KIDS. I’m so upset, this is unacceptable.”

Some are comparing these arrests to past protests when police shut down roads and bridges, or, on August 17, when the police allowed a group of Proud Boys and other right-wing protestors to walk across the Hawthorne Bridge to keep separate from antifascists. Mayor Ted Wheeler is waiting for the results of an internal review before releasing a statement. 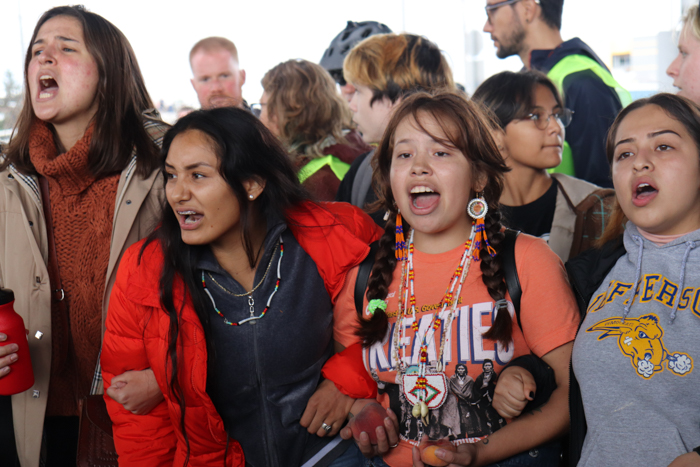 “For my tribe, we had an ancestral fishing grounds for thousands and thousands of years and they were blocked by a dam so they’re not there anymore. Celilo Falls is gone. We can’t fish. We don’t have any water. We can’t drink water on the reservation—we have to boil it first. And nobody cares because we’re brown, we’re indigenous. People care now because they’re white. So, we’re yelling because we’re one of the few brown people who can—We can be here. We’re going to take up as much space as possible.” Lilajane, 19 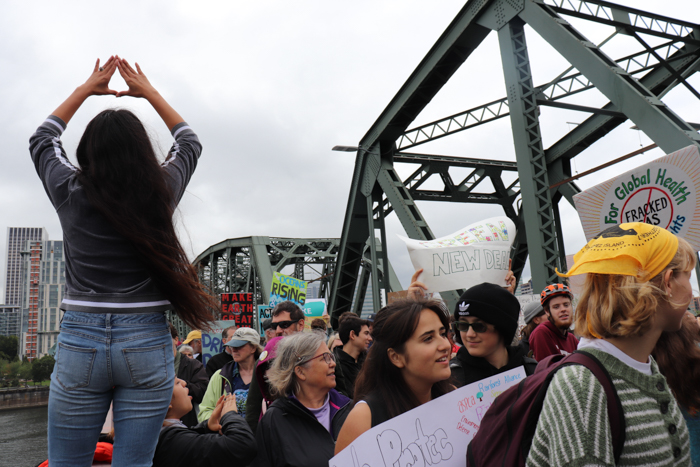 “I’m from a tribe in California where there was a nuclear waste landfill put on it and there’s no more fish in our river…a lot of times, people will say, ‘This is a global thing. Race has nothing to do with it.’ But for our local communities here in the US, the impact of global warming is almost all about race. It’s the frontline communities that see it first—that have been seeing it first.”
“We’re here taking up space because Portland is a city where you have those “In Our America” signs and “Black Lives Matter” signs. If black lives matter, then give us a Green New Deal.” Sophia, 18. Cahto tribe of the Pomo nation, California 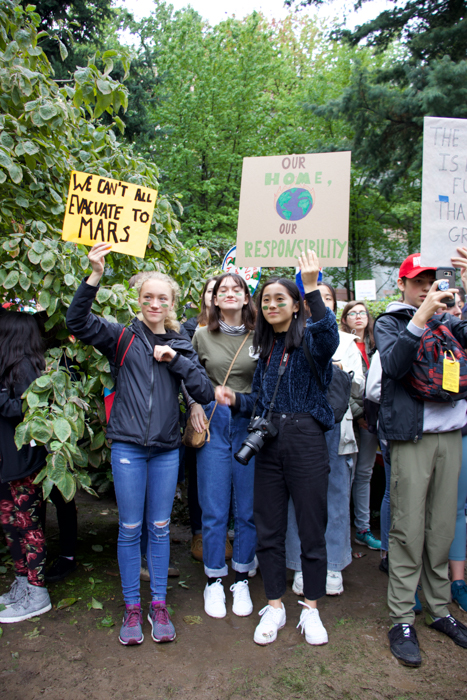 “I think that a lot of people don’t think of earth as their home. They think that it’s always going to be there for us and it’s really not true.” Sarah, 10th grade
“Climate change started to scare me because I realize it’s happening now and it’s going happen for my children and it just feels really real, so I decided that this is one of the ways I can help make a difference.” Hazel, 10th grade
“There’s this inaction, nobody is doing anything, and we need to do something now otherwise we’re just screwing over the planet and we’re just going to face the consequences later.” Megan, 10th grade, using the sign she made for the climate rally last March.

“I just want to make a difference, that’s all.” anonymous, 10th grade 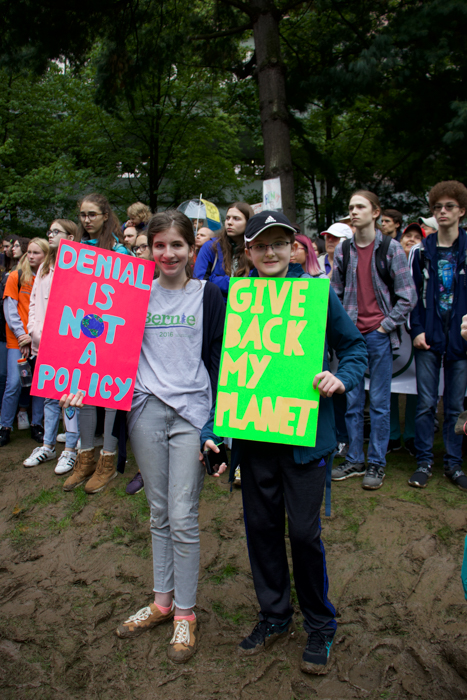 “I wanted to support the climate because if we don’t, there will be no planet later for us to support.” Sophie, 8th grade (L)
“I don’t want global warming because it changes the weather and it changes my favorite seasons from snow here and it makes it so it doesn’t snow anymore.” Brooke, 7th grade (R) 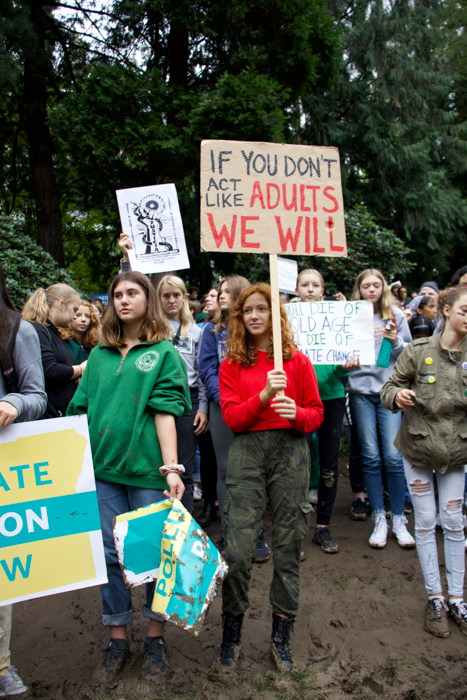 “I feel like Trump and the people he’s working with aren’t doing anything about our climate. Our climate is being destroyed by fossil fuels and everything and I feel like I’m done with that because we need…we need our climate. If we don’t have our climate, we will die and people don’t seem to understand that.” Elena, 12 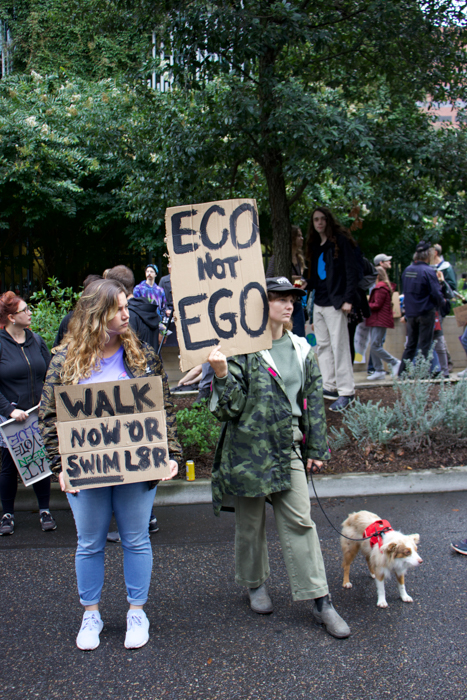 “I feel like this isn’t that big of an inconvenience to come out here and show up, to avoid a bigger inconvenience later.” Jenna, age 25 (L)

“I feel like humans are really selfish and everyone can only think about themselves. It’s time we think about everybody as a whole instead of an individual.” Louisa, age 31 (R) 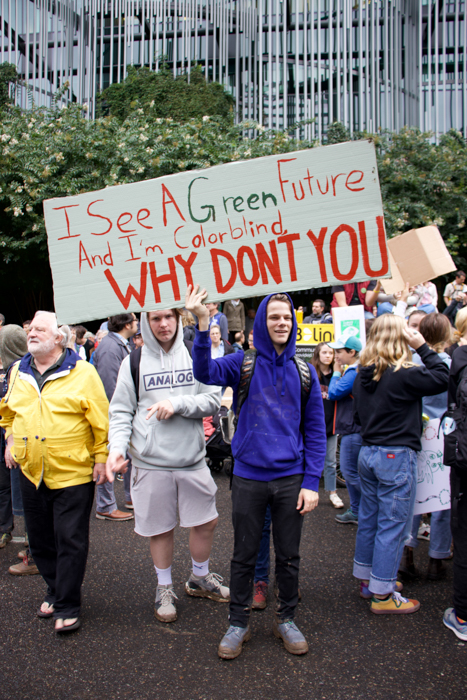 “What brought me out today is: I don’t want to die. I think that if the planet dies, it’s not only us that dies, it’s everything on the planet and I don’t think that’s a good thing.” Alden, age 16. 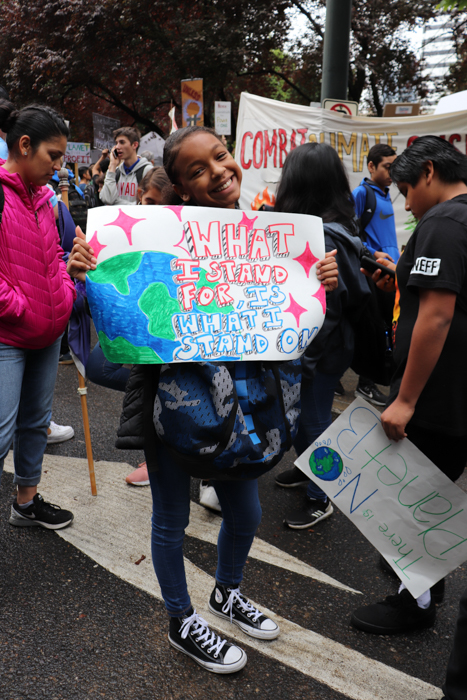 “I went vegetarian because the cows are farting. You guys should go vegetarian. The food’s not as bad as vegan.” Somaya, 12 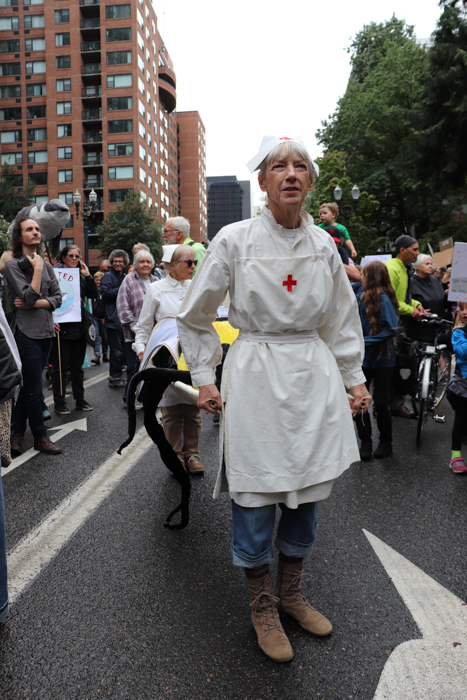 “We want to save the bees because they’re dying. If we lose our pollinators, we lose all of us. This day—oh, I’m just so excited to see all these people and kids.” anonymous (back left) 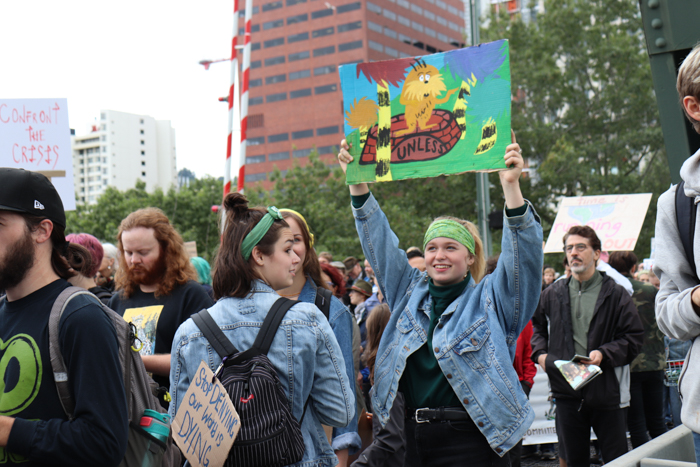 “Today we’re here striking from school to represent ourselves because me and a lot of my peers are too young to vote, so this is really our only option to force change through our government. Climate justice is an issue that really matters to us because it directly affects our health and our safety.” Matilda Milner, 16 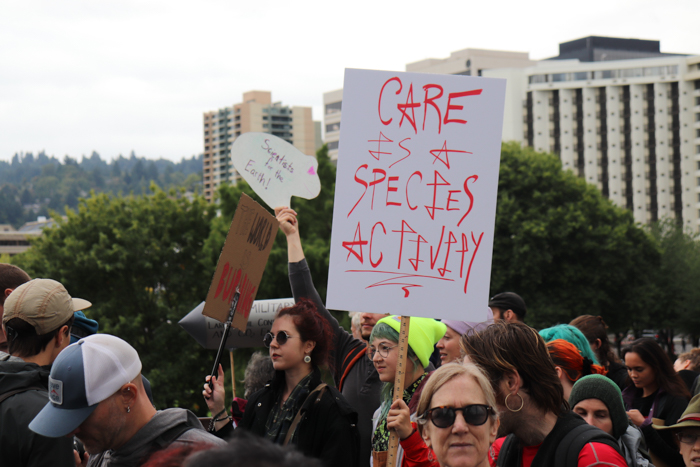 “I feel very enthused by the turnout today. It’s a beautiful event and it’s wonderful to see all the children.” Caden, 27.  (in neon beanie) 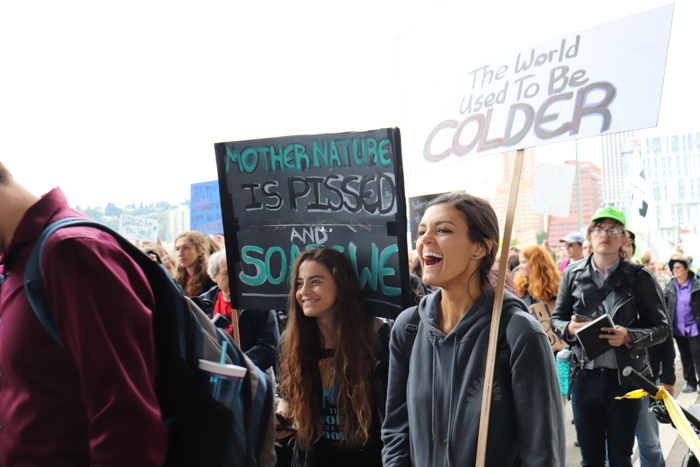 “For awhile now, I’ve thought about what’s going on and I just saw this as an opportunity to really participate and get with the world because that’s what we need to do. We all need to come together right now. We can’t live separately. We can’t live against each other anymore. We’re all humans.” Kestral, 22 (L) 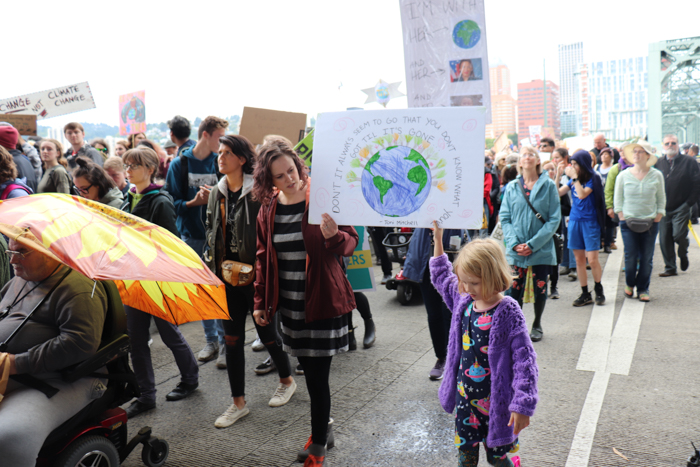 “The flowers.” Young marcher’s favorite part of the poster. 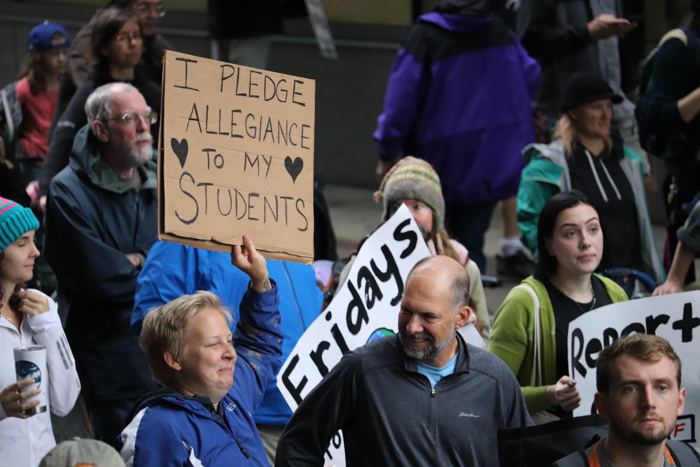 “Our students have a lot to say. I think further generations before us have kind of failed with creating some action. I think our youngest generation right now really knows where their priorities are and I think it’s time for us to look to them as teachers instead of us teaching them.” Teacher from Springwater Environmental Sciences School 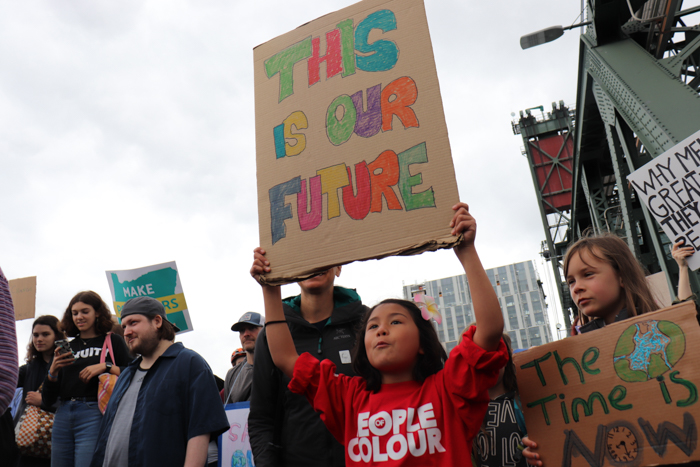 “Climate change is a real thing and people need to do something!” Viola, 9

Written By
Margo Craig
More from Margo Craig
On Jan. 25 2019, the federal government emerged from the longest shutdown...
Read More