The primary election on May 19, 2020 is likely the most important election you will participate in this year. No, not because of the presidential primary. The really important races you should be paying attention to are state and local races—the ones that decide who represents your State House district, who becomes mayor of your city, and who decides the public school curriculum.

76 out of 90 legislators in the Oregon Legislative Assembly are up for election in 2020.  Three judges on the Oregon Supreme Court, including Chief Justice Martha Walters, are up for re-election in 2020. Four appellate court judges are on the ballot. The Mayor of Portland and three City Commissioner seats are up for election, as is the Oregon Secretary of State, who oversees elections in Oregon. The elected officials that hold these offices exert an outsized influence on every single Oregonian, whether on a local or statewide level. Chances are, you may not have known most of them were on the ballot this year.

Do you know who your state representative is? More importantly, do you know who’s running for their seat? Many state and local elections are decided long before Election Day in November, on primary day in May. In some cases, like the Portland Mayoral election, if a candidate gets 50% or more of the vote in the primary, they win outright and don’t have to run in November. 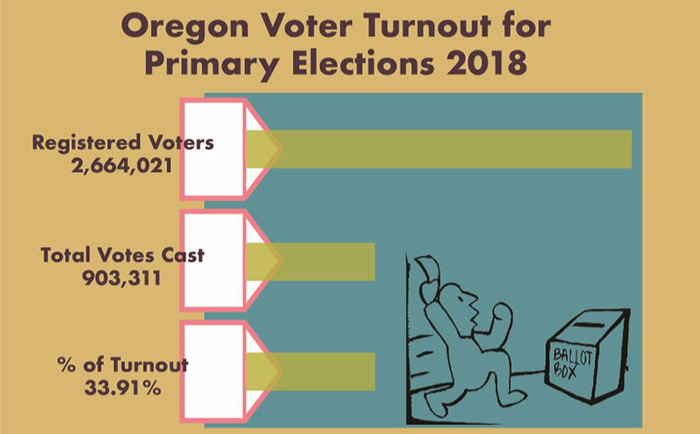 infographic by May Walker of Oregon Voter Turnout rates in the 2018 primary elections. There were 2,664,021 registered voters. 903,311 votes were cast. Oregon’s voter turnout was just 33.91 percent. Your vote makes an even bigger difference when most people aren’t voting. Graphic contains an illustration by Ciaran Dillon of a person racing toward the ballot box to vote.

In most Oregon State House and Senate districts, the primary is the whole ballgame. If you live and vote in the Portland Metro area, your district likely isn’t competitive in the general election. Most Portland legislative seats are solidly Democratic, with candidates often winning with over 90% of the vote. That means that whoever wins the primary is often guaranteed to win the seat. It also means that if someone wants to unseat an incumbent, they often stand the best chance of beating them in the primary election.

One relatively high-profile primary campaign this year is happening in East Portland, in House District 42. The district has been represented by labor organizer Rob Nosse since 2014. Nosse ran unopposed in the 2016 and 2018 primaries, and faced negligible opposition in the general election from Independent and Libertarian candidates. In 2020, Democratic Socialist Paige Kreisman is mounting the first serious primary campaign for the seat in six years.  Vigorous debate and vocal disagreement are signs of a healthy democracy, and voters should have a real choice presented to them on the ballot. Whichever candidate you may support, hopefully everyone will agree that no seat should be taken for granted.

In 2018, out of 77 total seats in play, only one State Senate seat and three State House seats switched parties; only one state senator lost a primary challenge, and there were no successful primary challenges at all in the House. Interparty competition in Oregon is remarkably inelastic. If a party controls a legislative seat, odds are they’ve held the same seat for decades. In a highly progressive city like Portland where a Democrat has little fear of losing to a Republican, primary elections are that much more important—whoever wins the primary is virtually guaranteed to win the seat. There are essentially no “swing seats” in the Oregon Legislature. And where there is no competition, there is no interest. Apathy about state and local elections runs the risk of obscuring real policy differences among candidates, elected officials who can affect your life for better or for worse. Worried about the gas tax? Call your state representative. Concerned about the state of public transit? Email a member of the city commission, call the mayor’s office, or talk to a member of the Trimet Board of Directors.

Ultimately, though, the most important thing you can do is vote. Vote for each and every position on the ballot, no matter how far down it is or how insignificant it might seem. The people next to those little check boxes are running for real offices with real power, which is something we can’t afford to get complacent about. The judge you vote for at the trial court level might end up deciding the leniency of your DUI sentence. That candidate for school board might decide to move money from the arts budget toward a program for STEM tutoring. You will have no way of knowing unless you show up, listen to what the candidates have to say, and vote for who you think is best. To do anything else is to give up your power as a citizen.

The deadline to register to vote in the May 19 Primary is Tuesday, April 28. The deadline to register for the November 3 general election is Tuesday, October 13. You can register online at the Oregon Secretary of State’s website. You will need an Oregon driver’s license, driver’s permit, or ID card number issued by the Oregon DMV. If you’ve already registered to vote in Oregon but need to update your registration, you can do it easily from the same website. You can find ballot drop off sites in Multnomah County at the Multnomah County Elections Division website. As of 2019, you can drop your ballot inside the envelope it came with into any mailbox — if you are going to mail your ballot after the Wednesday before an election, the Secretary of State’s website suggests that unless you drop it into an official drop box at an official drop box site it may not be counted. You can find your state senator and representative by going to the Oregon Legislative Assembly website and clicking “Find Who Represents You,” then clicking your district on the map. Voting as a student, especially if you don’t have in-state residency for tuition purposes, can seem complicated. Campus Vote Project has information for students looking to participate in the democratic process. Information includes residency requirements, deadlines to be able to vote in primary elections, and other frequent concerns of student voters—this guide can be found here: www.campusvoteproject.org/state-student-voting-guides. Additional information can be found at www.vote.gov.

Written By
Nick Gatlin
More from Nick Gatlin
Joe Biden is the Democratic nominee for president in 2020. That’s a...
Read More